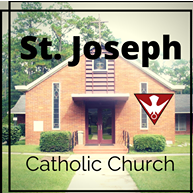 The Holy Sacrifice of the Mass was first offered in Bainbridge about the year 1881 by a most zealous priest, Reverend Charles Clement Prendergast, a missionary from Savannah. At that time there were only two Catholic families living in Bainbridge. But several times each year Father Prendergast made trips to the town and offered up Mass on an improvised altar in one of the homes. An old chronicle says, “Due to the large territory over which the good priest ministered, to the rough roads and the poor traveling facilities, his visits were necessarily infrequent. In 1882 the Rev. William H. Gross, Bishop of Savannah, came to Bainbridge to administer the Sacrament of Confirmation. On that occasion, he also lectured to a large crowd in the courthouse.”

In 1877, Father Prendergast purchased a corner lot on Water and Independent Streets. On this lot was a small one-room building which had served as a school house during the week and as the Episcopal church on Sundays. Those who helped, especially in this acquisition, were the Messers, Ned and Jack Swindell and their two sisters, the misses May and Maggie. Miss May Swindell later became Mrs. T.D. Dugan of Quebec, Canada. They furnished lumber.

The exterior soon took on the appearance of a little chapel, while the interior, with the altar, confessional, and sacristy of curly pine from the Swindell mill on the Flint River, caused it to be acclaimed as one of the prettiest, maybe the prettiest in the area. The statues of the Blessed Virgin and St. Joseph were gifts to the Misses Swindell from friends in Canada. Miss May gathered the few Catholic children together for prayer and religious instruction.

After the death of Father Prendergast in 1898, Rev. Henry Schlenke of Columbus, Ga., through the solicitation of Miss May, made occasional visits to Bainbridge until the head of this mission was established in Albany.
On July 1, 1936, a new chapter began in the history of St. Joseph’s church when Fr. Thomas I. Sheehan was appointed first resident pastor of Thomasville Catholic Parish. This new parish took in Decatur County and eight other counties in southwest Georgia. The priests of Thomasville parish now began to minister to the spiritual needs of the congregation of St. Joseph’s. Later Catholic pastors of Thomasville were, Fr. Joseph G. Cassidy, appointed in 1939, Fr. Michael Manning, in 1940, and Fr. John J. O’shea, in 1945.

The final chapter in the history of St. Joseph’s began in December of 1952, when the Franciscan Fathers of the New York Province were entrusted with the care of the Thomasville Parish and its extensive territory of nine counties. Fr. Hilary Deck was the first Franciscan pastor of St. Joseph’s. He was succeeded in 1956 by Father Finian Kerwin.

Since the original church was now too small for the growing congregation, many of whom were working at the Bainbridge Air Force Base, a new church was planned. A large piece of property, extending from Randolph to Middleton street, located between Alice and Ramsay streets, was bought and plans were drawn up for a church to seat about 144 adults. The altar rail, beams, pews and the confessional are all of varnished heartwood. The sides are of a beautiful brick with the stations of the cross there. The windows in the auditorium part are stained glass.

In the back of the church there are the sacristy, with a parochial hall attached, kitchen, toilet facilities and a room to accommodate the priest in his regular visits to the church. The church is completely heated and air conditioned. This new church was dedicated on Nov. 30, 1958 by the Rev. Thomas
McDonough, Bishop of Savannah.